My buddy and I drove up to Pickett State Park which recently was designated a Dark Sky Park by the International Dark Sky Association. The night wasn’t perfect; cold, little too windy, and high thin clouds to the south that at times mucked with our images.  I had wanted to test out a new widefield camera tracker from StarSync LLC.  Unfortunately, I forgot my intervalometer so I was limited to 30 second exposures which isn’t the best test.  Still, I think it’s the tracker I’ve been waiting for.  I love the design. 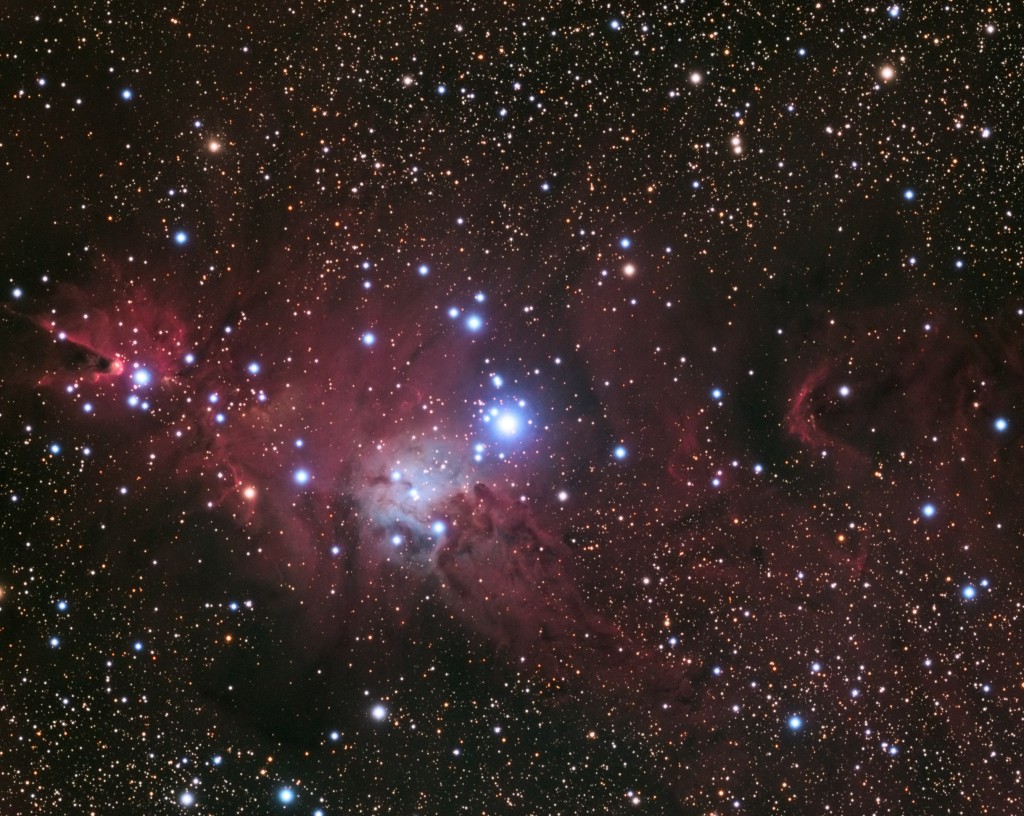 This enigmatic formation of gas and dust lies in the constellation of Monoceros (the Unicorn) not far off the right arm of Orion. This is a close-up of a small section of a much larger complex, generally known as the Christmas Tree cluster. The mysterious Cone Nebula is also a part of this same cloud.

The red regions of this nebula are caused by hydrogen gas that has been stimulated to emit its own light by the copious ultraviolet radiation coming from the hot, blue stars of the cluster. The blue areas shine by a different process: they are mainly dust clouds that reflect the bluish light of the same stars.

Its popular name arises because the nebula looks like the head of a stole made from the fur of a red fox. 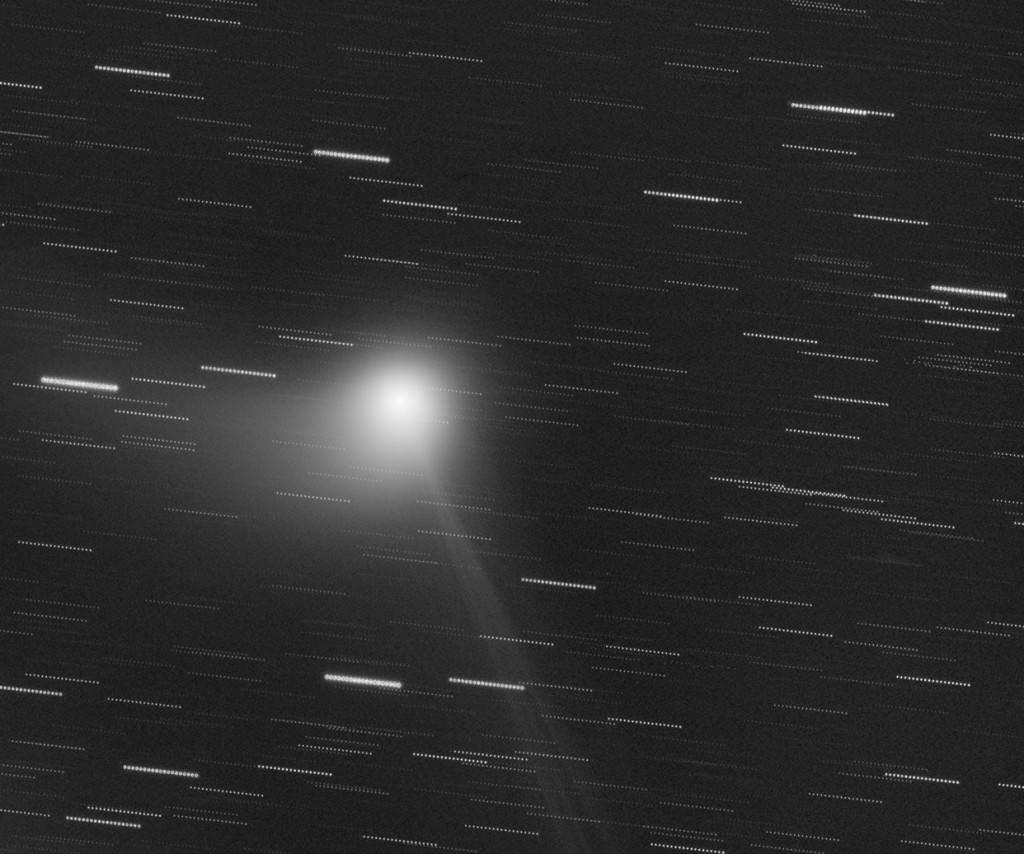 Comet C/2013 US10 (Catalina) Integration centered on the comet and showing the star trails as the comet moves relative to its celestial backdrop.

When discovered on 31 October 2013 observations from another object from 12 September 2013 were used in the preliminary orbit determination giving an incorrect solution that suggested an orbital period of only 6 years.[1] But by 6 November 2013 a longer observation arc from 14 August until 4 November made it apparent that the first solution had the wrong object from 12 September.[2]

By early May 2015 the comet was around apparent magnitude 12 and had an elongation of 60 degrees from the Sun as it moved further into the southern hemisphere.[7] The comet came to solar conjunction on 6 November 2015 when the comet was around magnitude 6.[6] The comet came to perihelion (closest approach to the Sun) on 15 November 2015 at a distance of 0.82 AU from the Sun.[3] At perihelion, it had a velocity of 46.4 km/s (104,000 mph) with respect to the Sun which is slightly greater than the Sun’s escape velocity at that distance. It crossed the celestial equator on 17 December 2015 becoming a northern hemisphere object. On 17 January 2016 the comet will pass 0.72 AU (108,000,000 km; 67,000,000 mi) from Earth and should be around magnitude 6[6] while located in the constellation of Ursa Major.

Thin clouds to the south lingered half of the night. 30 second exposure at 17mm FL, Canon 6D, tracked on StarSync Tracker. Orions belt and sword are prominent. 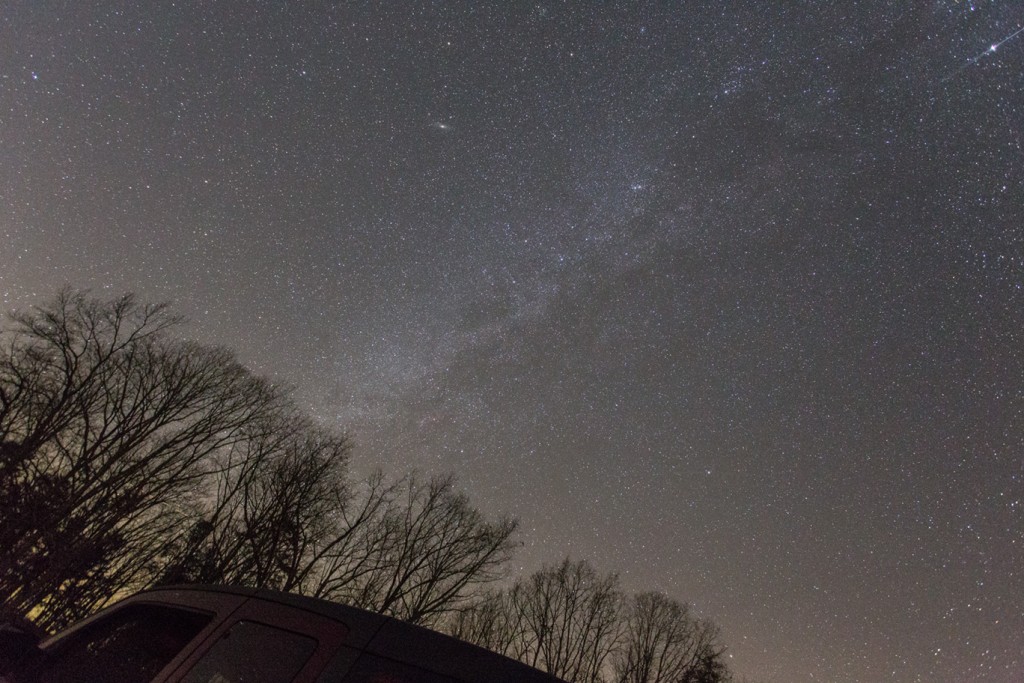 Another test of the StarSync Tracker. 17mm FL with Canon 6D, StarSync Tracker, 30 second exposure. M31, The Andromeda Galaxy, is the prominent galaxy in the top middle of the image; second of course to the winter Milky Way.