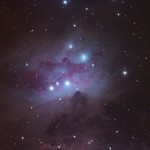 NGC 1973/5/7 is a reflection nebula 1/2 degree northeast of the Orion Nebula. The three NGC objects are divided by darker regions. It is also called The Running Man Nebula and Sharpless Catalog 279.

This object was named ‘The Running Man Nebula’ by Texas Astronomical Society member Jason Ware. Approximately 20 years ago his down stairs neighbor looked at the object and said it looked like a running man. He brought this up a TAS club meeting and the name stuck. Now widely accepted as ‘The Running Man’.